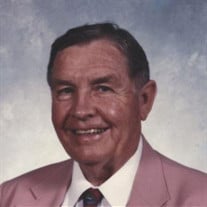 Great Falls The funeral for Ephraim Glaze Jackson of 5084 Great Falls Highway, Great Falls, SC will be conducted at 2:00 PM on Sunday, August 20, 2017 at Bethesda United Methodist Church, Highway 200 with Reverend Mike Catoe officiating. Internment will be made in the church cemetery with Dantzler-Baker Funeral Home in charge of arrangements. The family will receive friends from 1:00 PM to 2:00 PM prior to service at Bethesda United Methodist Church. Mr. Jackson died Wednesday, August 16, 2017 at Morningside of Lancaster. Born in Great Falls, SC on September 27, 1922, he was the son of the late Henry Grafton Jackson, Sr. and the late Lila McKeown Jackson. Mr. Jackson graduated from Great Falls High School in 1940, graduated from Wofford College in 1943, and served in the U. S. Army for three years where he received three battle stars while serving in Germany. He married Mary Lee Johnson in 1946 and they had four children, three have preceded them in death, Kathy, Martha Gay, and Robbie. His wife, Mary Lee Jackson died June 30, 2005 after 60 year of marriage. He is survived by a son, Ephraim Michael “Mike” Jackson, a daughter-in-law, Lynn Bankhead Jackson, two grandsons-Michael O’Neil (Jessie) and Henry Tyler Jackson of Columbia, SC and two great grandsons Henry and Sam Jackson, a brother Thomas A. (Tucker) Jackson, Sr. and a sister Lila Jean Bailey, both of Great Falls, and a number of nieces and nephews. He was employed by J. P. Stevens & Company for 37 years, serving as paymaster and office manager. He was the first manager of Republic Federal Credit Union where he served 23 years, was elected the first “Man of the Year” of S. C. Credit Union, served as chairman of S. C. Credit Union League for two years, and served as a National Director in the Credit Union movement. He was active in the community, serving as President of local school PTA, served 16 years on County School Board-2years as Chairman, Served on Chester County Red Cross for 15 years-4 years as Chairman, served as President and “Man of the Year” for Great Falls Jaycees, served his church-Bethesda United Methodist church-for many years-Sunday School teacher, Lay Leader, delegate to S. C. Methodist Conference over 20 years and served as church treasurer for over 50 years. He was a member of the Great Falls Lions Club and very active in the GRASP organization, serving as treasurer for over 25 years. He was the first Worthy Patron and a charter member of Great Falls Order of the Eastern Star #211. He was a 60+ year member of the Great Falls Masonic Lodge #277 and was a member of the Chester County Golden Age Club. Memorials may be made to Bethesda United Methodist Church, P. O. Box 266, Great Falls, SC 29055 or to a charitable organization of their choice. Online condolences may be made to the family at www.dantzlerbakerfuneralhome.com.

The family of Mr. Ephraim Glaze Jackson created this Life Tributes page to make it easy to share your memories.

The funeral for Ephraim Glaze Jackson of 5084 Great...