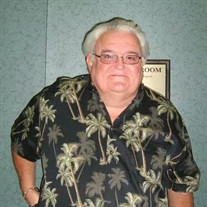 Great Falls Rev. Michael Edwin Sollers, 67, died Thursday, September 18, 2014, at Springs Memorial Hospital. A funeral service will be held at 3:00 PM on Sunday, September 21, 2014, at Evangel Temple Assembly of God with Chaplain Col. (Ret) Scott McChrystal officiating. Interment will be private. The family will receive friends from 6:00 PM to 8:00 PM on Saturday, September 20, at Dantzler-Baker Funeral Home, 26 Underwood Ave., Great Falls, SC. Rev. Sollers was born September 13, 1947 in Beavercreek, Ohio and was a son of the late Harold Edwin Sollers and Ida Durnbaugh Sollers. He was a graduate of Beavercreek High School, Berean School of the Bible, and attended Bob Jones University. Rev. Sollers achieved Eagle Scout, was a certified Red Cross life saver and a veteran of the U.S. Air Force having served during the Vietnam War. He was active in the community in many ways and was best known as sports announcer for high school football and basketball games for many years. Rev. Sollers was pastor of Evangel Temple Assembly of God in Great Falls for 30 years. Surviving is his wife of more than 44 years, Elizabeth Poe Sollers; one daughter, Alicia S. Williford (Ricky) of Great Falls; two grandchildren, Michaela Walden and David Williford both of Great Falls; Eva Roddey Morgan who resided with Mike and Elizabeth in their home; a nephew, Tony Tomashot (Tammy) of Great Falls and a niece, Jennifer Kuhn (Mark) of Morrisdale, Pennsylvania, whom he raised as his own children; a nephew, James R. “J.R.” Kimsey of Kentucky; and a niece, Wendy Kimsey-Martinez of Indiana. He was preceded in death by a sister, Peggy Tomashot Kimsey. In lieu of flowers, memorials may be made to Evangel Temple Assembly of God, P.O. Box 44, Great Falls, SC 29055. Online condolences may be made to the family at www.dantzlerbakerfuneralhome.com.

The family of Rev. Michael Edwin Sollers created this Life Tributes page to make it easy to share your memories.