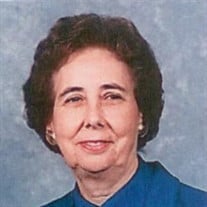 Easley, SC : Ruth Ferguson Barnett, 87, died March 24, 2015 at the Foothills Presbyterian Home in Easley, SC. Born Ruth Isabel Ferguson in Great Falls, SC, she was the 8th of 11 children of the late James Beaty and Mae Harrison Ferguson. Originally from Great Falls, she lived in Asheville NC for 45 years before moving to the Foothills Presbyterian Home 3 years ago. Funeral services will be held at Ebenezer United Methodist Church, Ross Dye Road, in Great Falls, SC on Saturday, March 28 at 1:00 pm conducted by Rev. Douglas Ferguson, nephew, of Birmingham, AL. The family will receive friends at Robinson Funeral Home, 1425 Powdersville Road, in Easley, SC on Thursday, March 26 between 4:00 and 6:00 pm. Mrs. Barnett was married to Edward W. Barnett, Jr. with whom she had two children – Cathy Barnett Gruetter of Athens, GA, and Edward W. Barnett, III of Easley, SC. She has two grandchildren, Matthew Edward Gruetter and Katie Gruetter Stephens, and two great grandchildren, Ty Sims and Kenleigh Stephens. Predeceased by her parents, husband, six brothers (James, William, Robert, Dan, John, and Tom Ferguson) and three sisters (Mary Cuming, Sara Hermelink, and Rachael Adair), Mrs. Barnett is survived by her children, grandchildren, and one brother, Charles Ferguson of Great Falls, SC. Mrs. Barnett taught school in the Asheville City School system for 30 years. She was an active and faithful member of Grace Covenant Presbyterian Church in Asheville where she was honored as Honorary Lifetime Member of the Presbyterian Women’s Club in 1994 and where she spent many hours lovingly helping in the kitchen with church functions and suppers. She was an active member and officer of Etheridge Women’s Club and PEO and was an avid cook, baker and bridge player. She loved to entertain in her home and was a dedicated care taker to several family members and friends. Her loving heart and strong spirit were gifts from God that touched the lives of family and friends who knew her. The family would like to thank the staff of Foothills Presbyterian Home and Lutheran Hospice for their loving and dedicated care. Memorials may be made to the Alzheimer’s Association, PO Box 96011, Washington, DC 20090-6011. Online condolences may be made to the family at www.dantzler-bakerfuneralhome.com.

The family of Ruth Ferguson Barnett created this Life Tributes page to make it easy to share your memories.