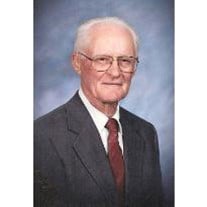 Great Falls Mr. Blair Walker Broome, age 90, of Great Falls entered into life triumphant on October 27, 2009. A celebration of his life will be held on Friday, October 30, 2009 at 3:00 PM at Mount Dearborn United Methodist Church with Rev. Scott Smoak and Rev. John Paul Sellars officiating. Burial will follow at Greenlawn Cemetery. Born on June 18, 1919, Mr. Broome was the son of the late James and Irene Broome. He was a loving and devoted husband, daddy, and granddaddy. He was an active member of Mount Dearborn United Methodist Church, having served as a church treasurer, chairman of the Official Board, president of the Lamplighters Sunday School class, Board of Trustees member, and church usher. He was a volunteer for the GRASP assistance program delivering food to the needy for many years. Before retiring, he was the owner and butcher of Broome’s Grocery. A highlight of his youth was being a member of the Great Falls High School football team and being a part of the Great Falls Red Devils winning the 1934 state championship. In the U.S. Navy, he proudly served his country during World War II. For over fifty years, he was an avid golfer and was a member of the Great Falls Republic Golf Course. He was a sports enthusiast and enjoyed life to its fullest. With caring and kindness, he touched the lives of many people; he will be greatly missed. Mr. Broome is survived by Norma Gray Broome, his wife of seventy years; three daughters, Anne B. Jackson, Debbie (Albert) B. Shealy, and Tina B. Jackson; seven grandchildren, Chuck (Natalie) Jackson, Cathy (John) Hobbes, Chris (Rhonda) Jackson, Matthew (Kara) Shealy, Lorianne (Jeff) Riggin, Kristen Jackson, and Lauren Jackson; six great grandchildren, Will Jackson, Wade Jackson, Wesley Jackson, Ashley Hobbes, Joseph Hobbes, and Chandler Jackson; and an anticipated great grandbaby Shealy; two sisters, Edna B. Williams and Dot B. Looper; and numerous nieces and nephews. He was preceded in death by seven brothers and sisters. The family will receive friends on Thursday, October 29, from 6:30 to 8:00 PM at Dantzler-Baker Funeral Home, 26 Underwood Ave. in Great Falls. Memorials may be made to Mount Dearborn United Methodist Church, P.O. Box 246, Great Falls, SC 29055 or to Palmetto Health Hospice, P.O. Box 7275, Columbia, SC 29202. Online condolences may be sent to the family at www.dantzlerbakerfuneralhome.com

The family of Blair Walker Broome created this Life Tributes page to make it easy to share your memories.