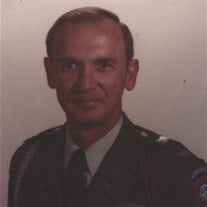 Great Falls Colonel Charles H. Ferguson, US Army Retired, 83, died Tuesday, August 15, 2017 at his home. A funeral service will be held at 2:00 PM on Saturday, August 19, 2017 at Mt. Dearborn United Methodist Church with Rev. David Ussery and Rev. Douglas Ferguson officiating. Interment will follow at Ebenezer United Methodist Church Cemetery. The family will receive friends from 5:00 PM to 7:00 PM on Friday, August 18, 2017 at Dantzler-Baker Funeral Home. Born in Great Falls, South Carolina, Colonel Ferguson was a son of the late James B. Ferguson and Mae Harrison Ferguson. A graduate of Great Falls High School, Clemson University and the Army War College, Colonel Ferguson was the Commander of the 1st Brigade of the 82nd Airborne Division. He was awarded the Legion of Merit with two Oak Leaf Clusters, Silver Star, Bronze Star, Vietnam Cross of Gallantry with Silver Star, Combat Infantry Badge, and Master Parachutist Badge. After retiring from the military service, he was involved in the management of real estate interests in the Great Falls area. “Charlie,” as he was known to his friends and family, was a member of Mt. Dearborn UMC where he taught Sunday School and was a Choir member for a number of years. In November of 1985, Colonel Charles H. Ferguson was awarded The Order of The Palmetto and was designated A Palmetto Gentleman. Colonel Ferguson is survived by his beloved wife of over 60 years, Sara Fort Ferguson: two sons, Charles Ferguson, Jr. (Loreta) of Chesapeake, VA and Sam Ferguson of San Francisco, CA; two daughters, Lynn Fowler (Bill) of Austin, TX and Laura Jolley (Ed) of Signal Mountain, TN; eight grandchildren, Will Fowler, Laura Fowler McKnight, Amy Ferguson, Jack Ferguson, Patrick Ferguson, Carolyn Jolley Stevens, Ed Jolley and Zach Jolley; and seven great grandchildren. He was preceded in death by his son, Jack Ferguson and his granddaughter, Sara Catherine Jolley. Charles Ferguson was the youngest of eleven children. The values of faith, hard work, honesty, integrity, and “doing the right thing” were instilled in him from a very young age. He was very proud of his family heritage in Great Falls. He loved his community, the State of South Carolina, and his country. He was a great American with a steadfast trust in the Lord. His life was filled with faith, family and friends. He especially enjoyed his buddies and golf rounds at Republic Golf Club, and often commented, “This is the prettiest place I have ever seen.” He had great wisdom and enjoyed helping and encouraging others. When recently asked for his advice, he replied, “Go to Jesus, ask, listen and follow”. “Blessed is the man who trusts in the Lord, whose trust is the Lord. He is like a tree planted by the water, that sends out its roots by the stream, and does not fear when heat comes for its leaves remain green and is not anxious in the year of the drought for it does not cease to bear fruit.” Jeremiah 17, verse 7. The family extends their most sincere and immense appreciation for the caregivers that have been such a blessing to him and his family. Memorials may be made to: Mt. Dearborn Methodist Church, P. O. Box 246, Great Falls, S.C. 29055, Ebenezer Methodist Church Cemetery Fund, C/O Mike Stevenson, 408 Valley 1 Drive, Winnsboro, SC 29180 or Hospice and Community Care, P.O. Box 993, Rock Hill, S.C. 29731. Online condolences may be made to the family at www.dantzlerbakerfuneralhome.com

The family of Colonel Charles H. Ferguson created this Life Tributes page to make it easy to share your memories.