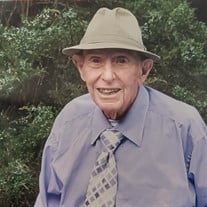 Blackstock Francis Marion Caldwell, 95, peacefully entered the Gates of Heaven at his home surrounded by his children on Saturday, December 4, 2021. Funeral services will be held at 2:00 PM Thursday, December 9, 2021, at Ebenezer United Methodist Church with Rev. Cecilia Davis officiating. Interment will follow in the church cemetery. The family will receive friends from 6:00 PM to 8:00 PM Wednesday, December 8, at Dantzler-Baker Funeral Home, 26 Underwood Ave., Great Falls, SC. He was born on March 24, 1926 in Great Falls, SC to the late James Samuel Heath Caldwell and Willie Meador McMeekin Caldwell. Marion grew up in the country on a large farm where he had many chores such as milking cows, plowing gardens, picking cotton, bailing hay as well as other farm jobs. He loved living in the country and resided across the street from the “Old Home Place” until his death. He attended Great Falls High School and served in the Army during the Korean Conflict from 1950 – 1952. After serving in the army, he worked for Fairfield Electric Cooperative in Winnsboro, SC and retired after 40 years of service. From 1953 – 1986, he and brother, Raymond, ran a dairy farm and sold milk to Coble in Lexington, NC. On August 24, 1963, Marion married Louise Elizabeth Wade at Mt. Dearborn United Methodist Church in Great Falls, SC. Marion was a devoted life-long member of Ebenezer United Methodist Church where he served on numerous committees and in many capacities. Mr. Caldwell was also a loyal member of the Great Falls Masonic Lodge #277 and a Shriner for 68 years. Marion Caldwell loved his family, friends, church family and his Rossville Community. He never met a stranger and his legacy will live on through all of those who knew him. He was a true gentleman and lived life to the fullest. He is survived by his children, Mary Ann Caldwell Weir (Wally), Betsy Nease and Jody Caldwell all of Blackstock; grandchildren, Dakota Weir of Fort Mill, Patrick Nease of Blackstock, Zack Weir of Swansea, Ashlyn Nease of Blackstock; and numerous nieces and nephews. Mr. Caldwell was preceded in death by his loving wife, Louise, of 50 years; a granddaughter, Lindsey Nease; a grandson, Camden Weir; seven siblings, Martha Heath Dixon, Joseph Caldwell, Florrie Caldwell Watkins, Robert Caldwell, Raymond Caldwell, Mary Caldwell Horton, Leon Martin; a brother-in-law, George Earl Wade and a sister-in-law, Mildred Wade Cooper. The family would like to express heartfelt thanks to Agape and Hospice Care for the care shown to their father with special thanks to Sharon Ledbetter and Jennifer “Jan” Smith for their love, care and devotion to Mr. Caldwell. Online condolences may be made to the family at www.dantzlerbakerfuneralhome.com.

The family of Mr. Francis Marion Caldwell created this Life Tributes page to make it easy to share your memories.