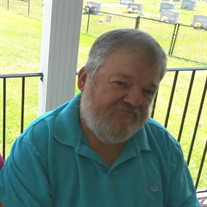 Blackstock Mr. Gerald Young McKenzie, 66, died Monday, May 14, 2018. Funeral services will be held at 2:00 PM Thursday, May 17, 2018, at Second Baptist Church of Great Falls with Rev. Tanner Mundy and Rev. Zack Williams officiating. Interment will follow in Greenlawn Cemetery. The family will receive friends Wednesday, May 16, from 6:00 PM to 8:00 PM at Dantzler-Baker Funeral Home, 26 Underwood Ave., Great Falls and other times at the home of Scott and Christine McKenzie. Mr. McKenzie was born September 11, 1951 in Hampton County, SC and was a son of the late Harry James McKenzie and Rosannah Young McKenzie. He attended the schools of Great Falls and was retired from Williamette Corporation after more than 20 years of service. Mr. McKenzie was a member of Great Falls Masonic Lodge #277 and the Cattleman’s Association. He enjoyed farming, fishing and coon hunting. Mr. McKenzie was a member of Second Baptist Church where he drove the church van, sang in the choir, was part of “The Lord’s Lunchbox” and was a volunteer with the youth of the church. He is survived by his wife of over 43 years, Emily Reeves McKenzie; one son, Scott McKenzie (Christine) of Chester; one daughter, Tina McKenzie Sayler (Mike) of Freeman, South Dakota; nine grandchildren and six great grandchildren including Carson and Reagan who make their home with Jerry and Emily; two brothers, James “Bubba” McKenzie (Mary-Nell) of Richburg and Robert “Rob” McKenzie of Great Falls; one sister, Julia “Becky” Boggs (Mark) of Lake Wateree; a daughter-in-law, JoAnn Bigham (Brett) of Lake Wateree; and several nieces and nephews. Mr. McKenzie was preceded in death by two sons, Corey McKenzie and Harry McKenzie and a sister, Janice Baker. Memorials may be made to Second Baptist Church, P.O. Box 515, Great Falls 29055 or Greenlawn Cemetery Association, P.O. Box 191,. Great Falls, SC 29055. Online condolences may be made to the family at www.dantzlerbakerfuneralhome.com.

The family of Mr. Gerald Young McKenzie created this Life Tributes page to make it easy to share your memories.