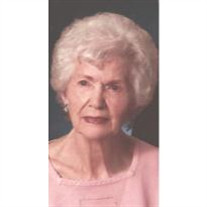 Winnsboro Mrs. Jacqueline Alexander, 91, of Winnsboro, died June 25, 2010 at Springs Memorial Hospital in Lancaster. Funeral services will be at 2:00 p.m. on Monday, June 28 at Mt. Zion Baptist Church with Rev. Grover Johnson officiating. Interment will follow in the church cemetery. The family will receive friends from 6:00-8:00 p.m. on Sunday, June 27 at Dantzler-Baker Funeral Home, 26 Underwood Ave., Great Falls, SC Mrs. Alexander was born June 13, 1919 and was a daughter of the late Jean Marie and Adele Schenck Ortet. She served in the U. S. Navy during World War II and in April she and Mr. Alexander were on the honor flight to Washington, DC. Mrs. Alexander was a retired Civil Service employee and a member of Mt. Zion Baptist Church. She was a member of the Order of the Eastern Star where she held numerous positions in South Carolina and North Carolina. She was an avid flower gardener. She is survived by her husband of 64 years, George L. (Bub) Alexander. Mrs. Alexander was preceded in death by her first-born son, George Lamar Alexander, Jr. She is survived by three children, Gary Alexander of Winnsboro; Karen Alexander Niklason and her husband Gary of Japan; Carlos Alexander and his wife, Sherry of Winnsboro; two grandchildren, Kelly Niklason and Mike Sanders. She was also preceded in death by her sister, Jean. Surviving are sisters, Catherine and Adriane, both of Pensacola, FL; nieces, Eleanor, Jan and Judy and nephew, Russell; and many other relatives and friends. Online condolences may be made to the family at www.dantzlerbakerfuneralhome.com

The family of Jacqueline Jean Alexander created this Life Tributes page to make it easy to share your memories.