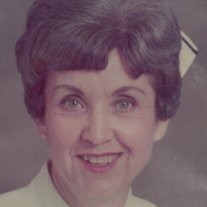 Great Falls - Mrs. Margaret (Margie) Willard Campbell departed this life on May 22, 2013 at Kershaw Health in Camden. A Funeral service will be held at 2:00 p.m. Friday, May 24 at First Baptist Church in Great Falls with Rev. Curtis Cameron and Rev. Buster Morris officiating. The family will receive friends immediately following the service in the Fellowship Hall. Interment will be private. Mrs. Campbell was born November 4, 1924 in Buffalo, SC, the daughter of the late Sidney Paul and Dovie Justice Willard. She was educated in the schools of Union County and was a 1941 graduate of Union High School. In 1945, she enrolled in the Cadet Nursing Corps at York General Hospital in Rock Hill. She graduated in 1948 and began a varied nursing career. She worked at Marion Sims (now Springs Memorial) Hospital in Lancaster and Chester County Hospital. She also worked as a Public Health Nurse in Chester County and as an Occupational Health Nurse for J.P. Stevens and Company for five years. In 1968, she became the first Director of Nursing of Chester County Nursing Center, from which she retired in 1986. She was active for many years in various activities in the Great Falls community, and was the 1973 Chester County Business and Professional Women's Club Career Woman of the Year. On September 26, 1948, she married the love of her life, Fred L. Campbell, Jr., and they shared fifty-seven and a half wonderful years together. She is survived by four loving sons and three daughters-in-law, Jeffrey (Wanda) of Camden; Tim (Jan) of Columbia; David (Gale) of Lake Wylie and Philip of Lincolnton, Ga.; ten grandchildren, Christa (Matt) Boss, Kelly (Ryan) Foster, Kim Campbell, Brent Campbell, Katherine Campbell, Rachel (Scott) Broadway, Anna (Al) Dawkins, Faith Campbell, Ashley (Michael) Dragon, and Wesley Stanton; and nine great-grandchildren, Annie Boss, Grace Foster, Nolan Foster, Juleeauna Campbell, Emma Broadway, Campbell Dawkins, Davis Dragon, Anne Gracen Dragon, and Lilla Dragon; two special nephews, Randy (Marchelle) Campbell and Sydney (Butch) Willard; and three special extended family members, Tommy and Diane Powers and HC Wright. She was predeceased by two brothers, James and Ray Willard, a daughter-in-law, Betty Campbell and a grandson, Parker Campbell. She was a former member of Mt. Dearborn United Methodist Church and, at her death, was a member of First Baptist Church of Great Falls. In 2010, she left Great Falls and moved to Camden to reside at Pinedale Residential Center. The family would like to give special thanks to all the staff at Pinedale Residential Center and Kershaw Health for all their tender, loving, and professional care extended to Mrs. Campbell. Memorials may be made to Greenlawn Cemetery Fund, P.O. Box 191, Great Falls, SC 29055. Online condolences may be made to the family at www.dantzler-bakerfuneralhome.com.

Great Falls - Mrs. Margaret (Margie) Willard Campbell departed this life on May 22, 2013 at Kershaw Health in Camden. A Funeral service will be held at 2:00 p.m. Friday, May 24 at First Baptist Church in Great Falls with Rev. Curtis Cameron... View Obituary & Service Information

The family of Margaret (Margie) Willard Campbell created this Life Tributes page to make it easy to share your memories.